skip to main | skip to sidebar

A few years ago, I bought a notepad with the quote above at the top (minus the word not), in pink ink.  I love it and have thought several times that I should have purchased dozens more.  Not that I could say which film the line was from -- 'Sabrina?,' 'Paris When it Sizzles?,' or 'Funny Face?'  But when I came back from Paris a few weeks ago, the quote was in my mind and I thought I should find out once and for all where the line appears.  An Internet search revealed all kinds of confusion, though it seemed clear that 'Sabrina' was the film.  Only one thing to do: watch my copy of 'Sabrina' and hear it for myself!  So I watched the film twice, from beginning to end (I hadn't seen it in a while and didn't mind at all; such a classic) and lo and behold, not once did Hepburn say that line.  Back to the Internet, where I found some chatter about the line appearing in the remake, with Harrison Ford and Julia Ormond.  Off to the library, where I checked out the remake (not as good as the original, but I suspect most of you know that) and voila!  Near the very end, when Sabrina learns that there really is only one boat ticket, she pulls herself together and says to Linus, "Paris is always a good idea.  I was happy there.  You would have been too."

So, it seems I've been duped, and so have you if you bought any of those cute notepads.  But I'm glad I now have it straight, and anyway, even if Audrey Hepburn's character never uttered that phrase the words happen to be true. During my recent visit the weather was a bit iffy, as it can be in late May/early June, and I was forced to buy a sweater.  The sun did peek out for several hours at a time, and on some days it was out in full; but even when it was overcast, it didn't matter: the city is as beautiful and rewarding on a gray day as on a sunny one.

I spent a fair amount of time by myself, which was intentional, and I wanted to revisit certain neighborhoods, sites, gardens, and eateries I hadn't been to in a long time.  On my list was


La Grande Mosquée de Paris, in the 5th arrondissement near the pretty Jardin des Plantes and which remains as lovely and moving since I'd last been there a decade ago.  The Mosque was founded in 1926 as a token of gratitude for the North African Muslims who died (some sources state as many as 100,000) fighting again the Germans in World War I.  There is a beautiful plaque inside the mosque honoring these men, as well as others for World War II and later conflicts. 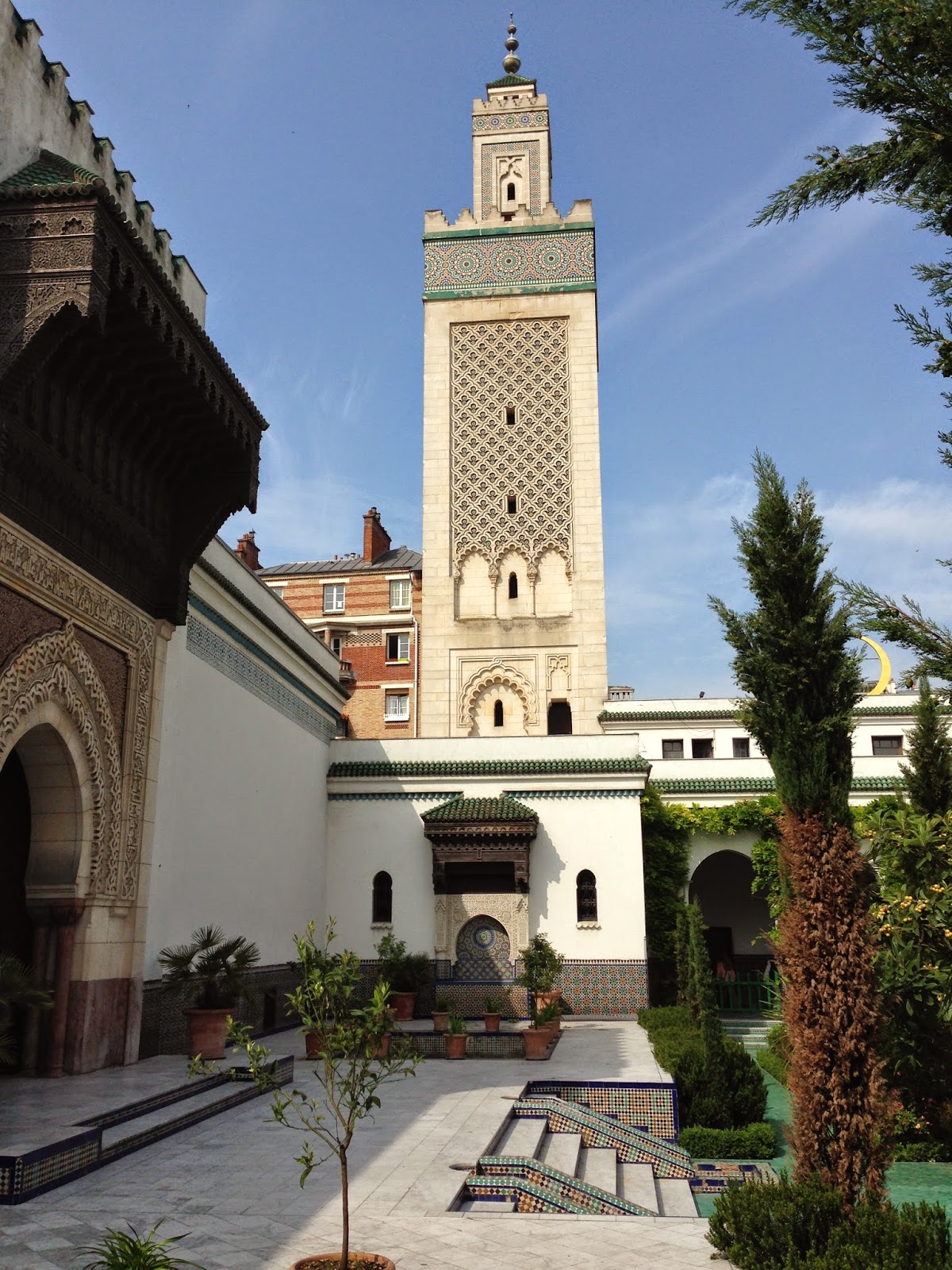 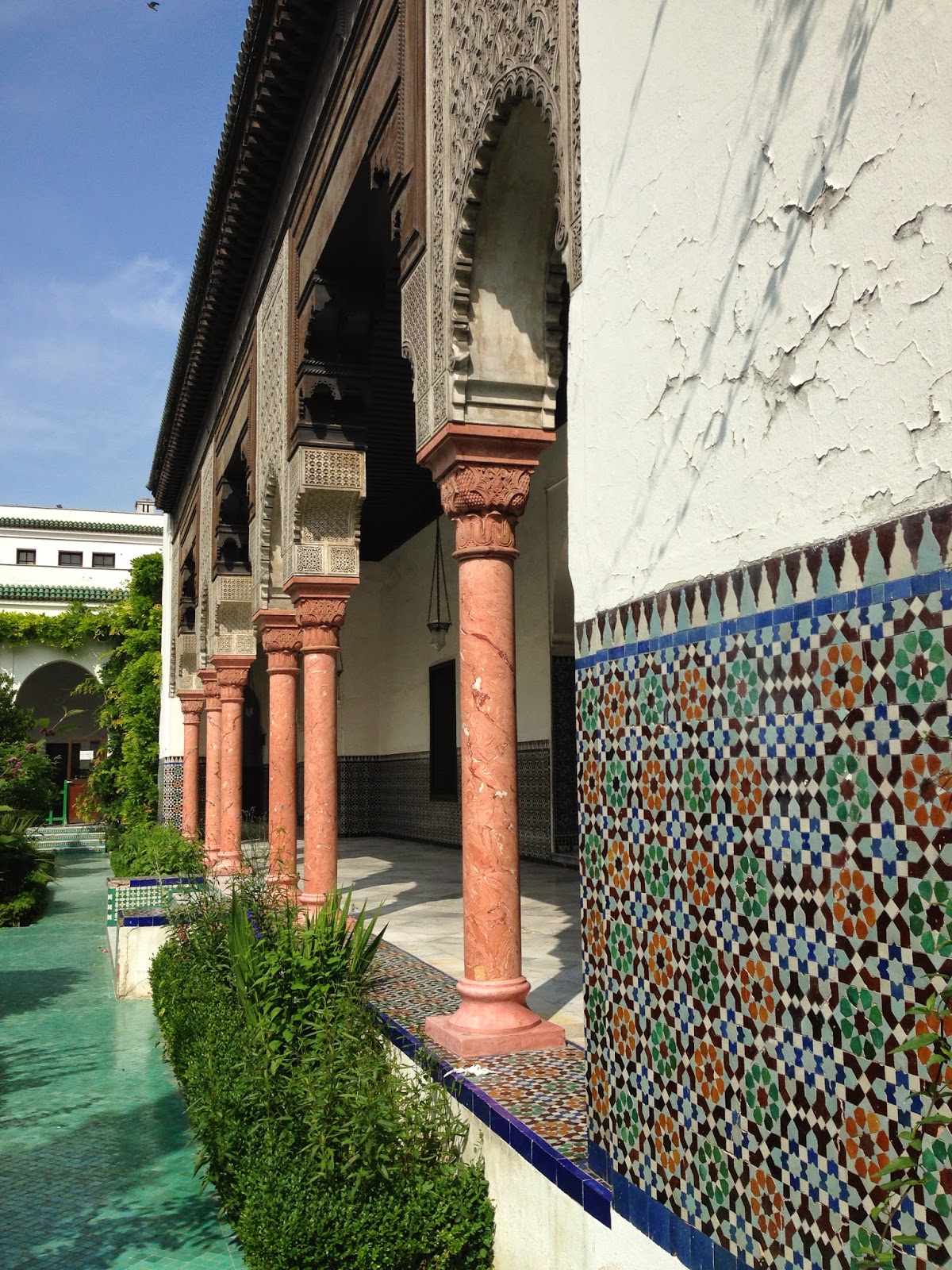 During the Nazi occupation of Paris during World War II, the Mosque's imam, Si Kaddour ben Ghabrit, and the congregation, reportedly organized a resistance effort that provided shelter and travel assistance to Jews.  According to Daniel L. Buttry, author of two editions of Interfaith Heroes, by the time the German army occupied France, the Grand Mosque was sheltering resistance fighters and North Africans who had escaped from German POW camps.  The Algerians in the mosque were mostly Berbers, and mostly from the Kabylia region.  They communicated in Tamazight dialect, which made their resistance cells virtually impossible to infiltrate.

Ben Ghabrit himself had three nationalities -- Algerian, Moroccan, and French -- allowing him to slip in and out of many contexts.  On 16 July, 1942, the French Vichy government ordered the Paris police to round up the 28,000 Jews listed on the census.  Some police officers leaked news of the sweep and only 13,000 Jews were caught.  Ben Ghabrit wrote a missive in Tamazight that was read aloud throughout the immigrant hostels in Paris, and in it he broadcast the news about the round-up, noting in part that "Their children are like our own children.  The one who encounters one of this children must give that child shelter and protection for as long as misfortune -- or sorrow -- lasts."  Daniel Buttry notes that approximately 1,700 Jews who weren't captured were given short term shelter either in the mosque or in nearby apartments.  A system was arranged so that if German or French police showed up at the mosque the fugitives would hide, even in the women's prayer room if necessary.  Some Jews were helped to safety in Algeria or Spain, others disappeared through the sewers directly beneath the mosque, and others hid in barrels on wine barges (steered by Kabyl men) down the Seine.

Ben Ghabrit apparently wrote many false birth certificates and other documents to hide Jewish children under Muslim identities.  Though he was under suspicion by the Germans, and was interrogated and threatened, Ben Ghabrit was never arrested as the Nazis were hoping to gain the support of France's Arab subjects.  The author team of Karen Gray Ruelle and Deborah Durland Desaix investigated this story for a book entitled The Grand Mosque of Paris: A Story of How Muslims Rescued Jews During the Holocaust (Holiday House, 2010).

The book opens with a quote found in both the Islamic and Jewish traditions: "Save one life, and it is as if you've saved all of humanity."  Despite various opinions on the true interpretation, I am fond of the quote, and though the authors state that "many of the details are destined to remain forever uncertain, with few facts proven to a historian's satisfaction," it's clear that something courageous and brave and kind happened here.  Whether the number of Jews saved is 100 or over 1,000, the story is worth telling and sharing.  The book is aimed at young readers but is appropriate for all ages and I highly recommend it.


The Grand Mosque is open Saturday to Thursday from 9:00 to noon and from 2:00 to 6:00.  Its lovely and tranquil cafe/tearoom is open from 12:00 noon to 3:00 and from 7:00 to 10:30 -- the outdoor terrace is especially nice on a sunny day and the indoor section is bright and colorful.  The hammam is authentic (meaning, not fancied up for tourists) and is great after a long plane flight if you're staying in the quartier or are in need of a restorative scrub.  The mosque occupies the entire block here, so note that the entrance to the cafe and the hammam is on the corner of rue Geoffroy Saint-Hilaire and rue Daubenton, while the main entrance to the mosque is on place du Puits de l'Ermite.


As I began this post with a note about a film I will also end about a film: When I got home I decided that since I'd never seen 'Les Enfants du Paradis' it was high time I did.  I didn't exactly love it, but I did find it compelling enough to watch it through to the end.  More interesting was the accompanying booklet, which included an excerpt from a 1990 interview with director Marcel Carné by Brian Stonehill.  The two spoke about Carné's fondest memories in making the film, and Carné related that he consulted several books about theater and in one of them he learned that historically, the upper balcony in a theater was called "Paradise."  At the time he was working on the film (in the 1940s, during the Second World War), this was no longer a common expression.  He notes, "So we played around with words.  There was a toy store that no longer exists, on the rue Saint-Honoré, close to the Madeleine.  It was called The Paradise of Children.  So we called the film Children of Paradise, but it can bear a double meaning.  The children could be the dead so they are in Heaven/Paradise, or they could be the actors who play those characters.  Also, the actors can be the children of the audience up there in Paradise." 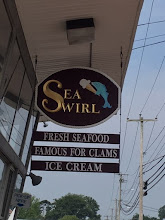 A Family Favorite in Mystic, Connecticut

Barrie Kerper
I'm a freelance travel writer and the author of a series, The Collected Traveler, with editions featuring Paris; Tuscany and Umbria; Provence, the Cote d'Azur, and Monaco; Northern Spain; Athens, the Peloponnese, and the Aegean Islands; Morocco; Venice, the Veneto, and Friuli-Venezia Giulia; Istanbul; and Southwest France. My blog supports all of my books but I also post about anything travel-related as well as unique topics I'm interested in and that I think my followers would be interested in. 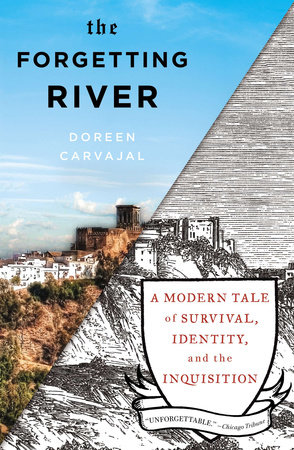